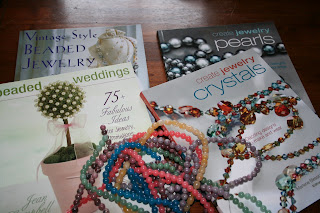 Mom & Dad left us home alone again on Saturday. They went to A BeadFest at The Valley Forge Convention Center. Mom brought some beads to make Rosaries and some books to learn how to make some jewelry. She said that the show was not what she expected. She thought there would be a lot of vendors that showed their work. She was hoping to get some ideas and some inspiration - especially where pearls are concerned, after all they are the gem of choice for most Bride's. Mom said it was more like a huge bead store. There were tables and tables of people selling beads, which was ok, she got some pretty good deals on various beads and some charms. She also picked up a whole bunch of business cards - future possible suppliers. Although there were a lot of vendors, there were not too many who sold crosses and crucifixes - Mom is always on the look out for them.

We had company on Sunday. Aunt Doris, Uncle Kenny & their two kids, Becky & Abby came up for dinner. Mom let A 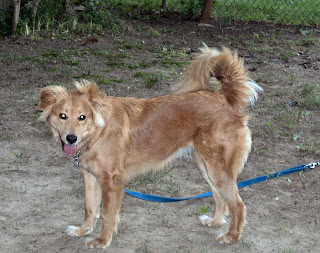 bby play with the stuffies - NOT FAIR, she won't let me play with them!!! She even told Abby to make sure I don't get a hold of them. Can you believe that!? That's OK 'cause Queen Fluffy Butt got even by peeing on the living room floor. She peed right in front of Dad's recliner. I think she was mad because we had too many people in the house and one of them was a little kid - Her Fluffiness is sort of afraid of little kids and Abby is only 9 years old. Magic barked at Abby when she tried to hug her - I didn't, I like all the attention and they all like my Cuteness. Aunt Doris kept asking Mom if she could take me home with them - of course Mom said NO! Aunt Doris has a doggie, her name is Honey Bear - Honey for short. That is her picture to the left. Mom took this picture at one of the barbeques Aunt Doris had - again she left us at home that day too.

The bi-ped gets to play with the stuffie but you CAN'T??? How unfair!!!

Be careful you don't eat any of those beads, even though they may look tasty!

That's no fair that you didn't get the stuffie or get to go to the bead show. Give your mom the sad eyes and maybe she will cave.

Wow that is cool that your mom is making some jewelry. I think that your mom should use you all as models for what she makes, ha roo~
Hugs,
Sitka

Too bad you couldn't play with the stuffie but at least you didn't pee on the floor. :)

Maybe you can get your OWN stuffie sometime soon. :)

Hi Holly, I know it is so unfair. Mommy says she let her play with the stuffies because she (Abby)only brought one of her toys and she was the only little person here.
Those beads do look yummy, so pretty and nice and colorfuk, but I won't eat them.
-Georgie

Hi Steve, Kat & Wilbur, I did give her the sad eyes but she still would not take us. She said they did not allow doggies at these kind of shows.
-Georgie

Hi Sitka & Tia, I think it is pretty cool too. She actually wants to try to make a Pearl Dog Collar for Uncle Fritz's wedding, but she says the Dog Collar is for people not us doggies. When did people start wearinf Dog Collars?
-Georgie

Hi Amici, I have a few of my own stuffies, but Mom's are so much better. All of her stuffies are Huskies. I don't have a Husky stuffie.
-Georgie

Your mom is so talented. Does she make earrings too? My mom tried, but has trouble with the wire Maybe she should take a class.

We want to see some of the things she makes.

Hi MayaMarie, Yep Momm does make earrings. She doesn't have any pictures of them, but she does have pictures of the Rosaries she makes. She even has a Rosary for Doggie Lovers. I will post pictures of it later today.
-Georgie