We want to wish all of our Friends a Merry Christmas and Happy New Year! 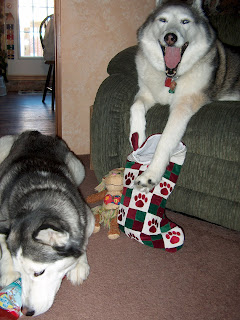 I was not able to post before today because Mom was very busy and I could not get to the 'puter. We had lots of company for Christmas Eve. We had a pretty cool party here. We had family members and some friends here - no doggie friends though! Queen Fluffy Butt and Me were allowed out on the deck alot, they had the deck door open so we were able to run in and out as we wanted to. It was really cool. I almost had some cheese, but Mom caught Uncle Chuck trying to give me some and told him not to feed me any cheese (I love cheese but unfortunately it does nor like me - it makes me sick!). I did get some crackers and a little bit of pepperoni - YUM!!!!!!
Christmas Day we - Me and Magic - got stockings full of goodies! We Got Stuffies!!!!!!!!!!!!!!!!
Magic got a monkey dressed in a grass skirt and I got a green lamb, we both got chilly bones and busy bones.
After everyone opened presents the rest of the family went out to breakfast and left us here to relax by ourselves. Then Me & the Queen decided we did not like the toys we got so we decided to trade. I now have the monkey in the skirt and Magic has the green lamb.
Later in the day everyone went out again. They went to Aunt Joan's house for Christmas Dinner - they left us home alone, again! Can you believe it? 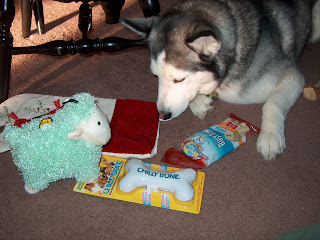 Aunt Joan did not forget us though. She sent home a Dancing Dog Crackler toy for Me and Magic. She sent a purple Raccoon and a pink Rabbit. Mom was trying to give me the purple Racoon, but we have not decided which one we want yet.
*********************
We now have another Christmas Story to tell.
Remember the Little Husky from the Animal Orphanage?
Well, She has a pending furever home with my Aunt Dor!!!!!!!!!!!!!
Aunt Dor's application was approved the Friday before Christmas!!!!! The Little Husky - who they are going to name Misty - was evaluated and although she passed the evaluation, the shelter is a little concerned because she is skittish and they are concerned because Aunt Dor has a 9 year old human girl and a 3 year old doggie girl. So Aunt Dor has to bring both the human and doggie girls to the shelter, to see if they all get along. If they all get along after the Little Husky girl is spayed she will be coming to her new home sometime next week!!!
So All you Huskies, Puppies, Doggies and People say a prayer that all works out well for this Little Husky Girl.
Posted by DKMaialetti at Wednesday, December 26, 2007

That's a really cool story about Misty! We hope it works out. You two got lots of good stuff for Christmas! Totally cool.

Hi Steve, Kat & Wilbur, Thanks. Keep your paws crossed and say a prayer that all works out today.
-Georgie

What a great Christmas you had! And lots of goodies too!

I will keep my paws crossed for Misty to find her furever home with your Aunt Dor!!

Anonymous said...
This comment has been removed by a blog administrator.
Friday, December 28, 2007

Hi Holly, Thank Wooo. So far Aunt Dor has an appointment to pick her up after the New Year. Mommy & Daddy are going with Aunt Dor today to see her - they won't let us go, they said it might be too much for Misty.
-Georgie.

Woo-Whooo, Thanks Kelsey Ann!
The Little Husky Girl went home yesterday with my Aunt Dor. Will post about her as soon as Mom gets the pictures-Georgie

Hey, Magic and Georgie, I tagged you! Check my blog for details.