Hi Everyone - I'm Back 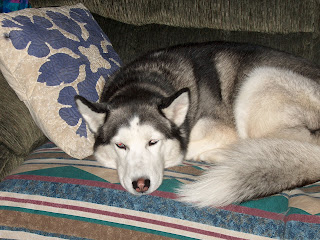 Hey Everyone, it's me Georgie.
I am back and I am feeling so much better!
First, I want to thank everyone for your well wishes, they really meant a lot to me. Thank You!
Obviously, I do not have a lot to say. I have not been doing much of anything, just laying around getting spoiled, and lovin' every minute of it!
Queen Fluffy Butt had some surgery done on her paw and mouth to remove some sort of growths, so she was under the weather also - but only for a day - she did really well with her surgery. Here we are resting comfortably after our ordeals. 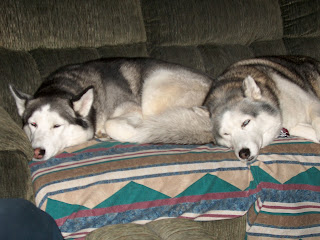 We both were being spoiled more than we usually are.
Because all of the medicine gave me a sick tummy, I had a special diet to follow, I had to eat boiled chicken and rice for a week - YUM!!!! I don't usually get table food because it doesn't usually agree with me, so this was really a special treat for me. It tasted really yummy!
The special diet did me some good - at least I think it did - because now I get either chicken or turkey added to me food everyday, just like the Queen! 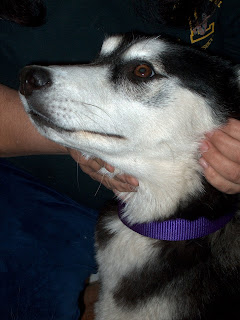 It seems that we were not the only Huskies in our family that was in the hospital recently. Our cousin Sasha (Aunt Dor's Little Girl) was also in the hospital - she was spayed. She is doing really well. She bounced back very quick.
Aunt Dor found out that Her Little Girl is a very young one, possibly even still a puppy! Her vet said he thought she was about a year old, possibly even younger.
She is full of energy and is in the destructive stages - she chews on everything!
Aunt Dor says that Sasha loves her crate. Sasha thinks of it as her 'room'. At night Aunt Dor tells the dogs 'it's bedtime' and Sasha just goes into her crate and curls up to go to sleep. Honey sleeps beside Sasha on the sofa.
So, it seems everything is okay all around. All the doggies in the family are doing really well after their various trips to the hospital.
Again, I want to thank all my friends for the Well Wishes you sent.
Posted by DKMaialetti at Saturday, March 29, 2008

Glad you're both feeling better. We had to do the chicken and rice diet once and it was delicious! We were kinda sad to go back to our regular food.

Hi Steve and Kat, I was kinda sad to go back to my dog food too, but Mom now adds REAL chicken or turkey to my dog food all the time. Woo-Whoooo!!!!!
-Georgie

I'm glad everydog is doing so well!! I hope you are getting lots of treats and cake, in addition to special food!

whew! I am glad both of you are feeling better!!!
Hugs
Sitka

Hey Kelsey Ann, Thank Woo. I am feeling much better. Mom and Dad even took me for a short walkie!!
-Georgie

Hi Holly,
Thank Woo. I am just getting the special food. No cake for me yet, but soon I hope.
-Georgie

Hi Sitka, Thank Woo, we are both doing good. We are being spoiled - and lovin' every minute of it!!
-Georgie

Georgie and Magic!!!! Welcome back my two beautiwool ladies. I am very glad to hear you are both in better spirits.

How awesome chicken or turkey in with your dog food. I would milk that for as long as I possibly could!! ;-)

Glad to have you ladies back! We all missed you.

Hi Quincy, Thank Wooo!
I am absolutely LOVING the chicken & turkey. I am getting one or the other every day now - Woo-whoo!!
-Georgie