Hey all you Huskies and Puppies.
It's been awhile, we have been pretty busy here, but I have finally found some time to sit at the 'puter, so.... 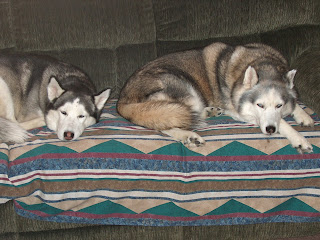 I am finally going up and down the stairs!!! It took me almost a year, but Mom and Dad were very patient with me. I have been doing the stairs for a little over two weeks. They had tried everything they could think about. They had asked for suggestions from all their rerscue friends and from friends on Sibernet-L, but nothing worked. I was TERRIFIED of the stairs. One night Dad helped me by putting me halfway up the stairs, and instead of leaving me there, he stayed behind me and encouraged me to go up - and I DID IT!!!! Each night Dad would put me on a steps a little further down and encourage me to go up and up I went. He did this until I did the entire flight by myself. Now I do!!! They are so proud of me - I am proud of myself too.
We had some SNOW, finally!!!!! We did not have much and it didn't last too long, but at least we had some. Mom let us out on the deck to play and of course she had her camera ready. She had to take pictures through the door because we would not let her out. 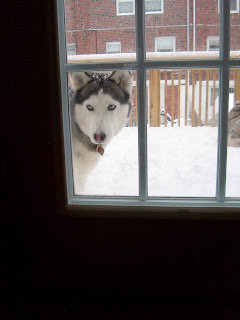 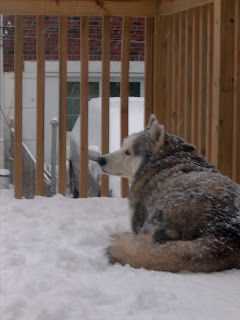 Our new cousin Sasha is doing pretty good. Aunt Dor had taken her to the vet and she got a clean bill of health - no more Kennel Cough! We all believe that Sasha is still a puppy - literally. We think, and so does her vet, that she may be somewhere between 9 months and a year old! She is your typical Siberian - an escape artist, she has gotten out of her crate a few times and has gotten out of the houuse 3 times already; she has dug several holes in her yard; and she has chewed a hole in the bathroom door, chewed a chair and a few other things. Aunt Dor is teaching her not to do those things.
Pam from Delaware Valley Siberian Husky Rescue sent my Mom a website called Colors of the Siberian Husky. It is a pretty cool sight. Mom hasn't read it yet, but from what she did see it explains all about how many different colors us Siberians can be and how we get that way. She is going to read it thoroughly when she gets a chance.
Medical Issues....
Both the Queen and Myself are going in the hospital. Her Fluffiness has a growth on her paw between her pads and one in her mouth. The vet is going to cut them off and do a biopsy to make sure they are not anything serious. She will be going in on Tuesday.
I am also going in the hospital - maybe on Tuesday, it depends on whether the medicine I need comes in, the vet had to order it. I am heartworm positive, so I have to have heartworm treatments. The heartworms are no real bad - I have a grade 1 infestation(?), which is a very early stage. I have had all kinds of tests done to see what kind of treatment - I had chest xrays, which show my heart and lungs are normal; urine tests, also normal; fecal tests, which show I also have hookworm; and bloodwork which show the heartworms. I will be in the hospital overnight for 2 days, then I need a month or two recovery time - so I may not be posting for awhile. However, Magic said after she recovers that she will keep everyone posted. 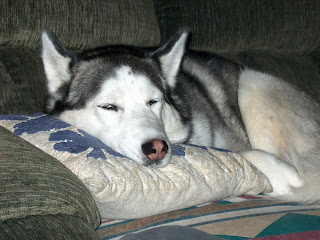 Paws crossed and sibe vibes that everything goes OK!

Gee, you have a lot going on in your home.

We hope the two of you feel better soon and that the vet can give you some medicine/advice that will work speedily but well.

We're keeping our paws crossed for you and sending happy wishes your way.

I'm glad you finally got some snow. Good luck with everything at the vet. I hope you don't have to go there too much or for too long!

Amici told us that you were off to the vets.

Wow, I sure hope everydog comes through their medical problems all safe and healthy!!! I will keep you both in my prayers! Please be sure to keep us updated, and check in so we don't worry too much!!

Lots of rest, coupled with chicken soup we hope. Vets can be a little scary, but we'll all be sending tail wags your way.

The Forget Sit and Stay Gang

Hey Kat, Thank Woo for the well wishes. Did you enjoy the snow? Ours didn't stay around long enough.

Hi Pippa, Thank Woo for the well wishes. All the way from Spain! Wow! I have lots of friends but I think you are the first International one. Mom has a friend in Switzerland but he don't have any doggies. This is Cool.
-Goergie

To Forget Sit and Stay Gang,
Thank ou for the well wishes. I am getting LOTS of chicken! YUM!!!