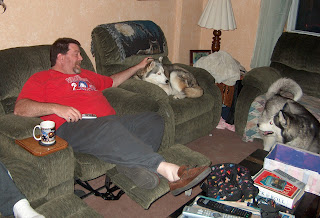 Mom tells me all the time that I am such a "Love-Bug". That I just hog all the attention.
Well she is right! And last week I became a 50-pound lapdog. Here's how it happened:
I was being petted by Dad. I was having a good time, being the center of attention. Queen Fluffy Butt was in one of her usual spots - on the sofa, just chillin'. All was right with my world - until I went to get a drink. 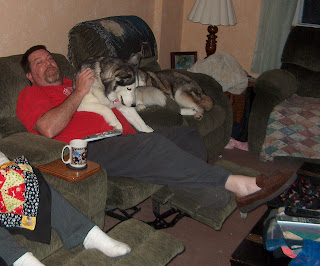 I came back and here Her Fluffiness was hogging all the attention! Can you believe it!? Apparently when I went to get some water, she decided to jump onto the chair that was next to Dad's and get all of Dad's attention. He was petting her, and talking to her. I want all the attention. So I went over to them and laid my head in his lap, you know, to give him the big 'Sad Eye' look. He started petting me, but I did not want to share with Magic, I wanted Dad all to myself.

So I got down and tried to squeeze between the two chairs to make him stop paying attention her. It worked a little - he was laughing and talking to me, but I still did not have his undivided attention.
I decided I had enough of this, so I backed up and jumped up into his lap. It worked! He stopped petting The Queen. He was petting me, and laughing, and we were having lots of fun - and I was getting ALL of the attention - not just from Dad, but from Mom and Andee too!
All is good with my world!
Posted by DKMaialetti at Saturday, May 17, 2008

Hi Kelsey Ann, Yes!!!! It was LOTS of fun. Everyone thought it was funny and laughed. I got sojme serious lap time.
-Georgie

Hi Huffle, Thank You. Lap domination is becoming one of my favorite things to do.
-Georgie

Great idea. I personally like to walk on my dad when he's sleeping. That gets attention too!

Hi Kat, I have to try that one!
Thanks
-Georgie