WOOOOO-WHOOOOO!! The Philadelphia Phillies are 1 win away from the NLCS Pennant!! 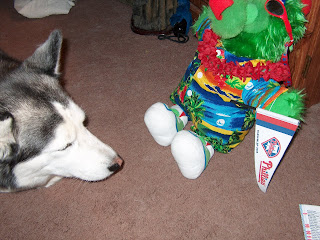 The Flyin' Hawaiian, Shane Victorino came through big time last night with a 4-run Grand Slam!! GO SHANE!!!!!! Shane Victorino is Mom's favorite Baseball player - next to the Phillie Phanatic! She also has a Phillies Gnome. This Gnome is pampered, he is not allowed out in the Garden (on the deck) like the rest of the Gnomes and Fairies. 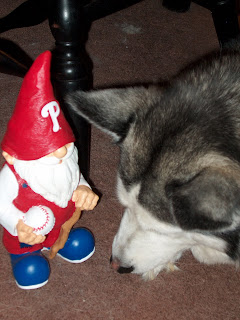 Anyway, The Phillies are up 2 - 0 for the NLCS Pennant. They need to win tomorrow night and they have it.

On another note, Mom & Dad are doing a doggie event tomorrow. They are going to the Bensalem Fall Festival with Delaware Valley Siberian Husky Rescue. I am not sure if Queen Fluffy Butt and Myself are going because I think Mom is going right after work. We want to go but she is not sure if she will have time to pick us up.
We have not been to any doggie events this year. Andee has done some events but Mom has been so busy at work, she cannot even go to the Hike-n-Howl. That is the big event that is put on by The Alliance for Northern Breed Rescues, which include:
Delaware Valley Siberian Husky Rescue

All three of these Rescues are G-R-E-A-T! I was adopted through Harnessed to Hope and Mom & Dad volunteer for both Delaware Valley and MaPaw! These Rescues could really use your support, so come on over to Core Creek State Park on Saturday, October 18, 2008. Click on the Hike n Howl link above for more info.
Also check out the links for the individual Rescues and checl out all of the available Doggies up for adoption.

CORRECTION: The Phillies needed to win 1 more to advance for the Pennant Race. Which they did today. Next up is the Dodgers.
Posted by DKMaialetti at Friday, October 03, 2008

I think you need to put your paw down and demand to go. Humans should not make excuses for leaving dogs at home.

Hey Steve, We ended up going! We had a really good time. Mom is going to post some photos soon.
-Georgie

Sorry, but there is always next year. :)
-Georgie

I can't wait for the hike-n-howl! I am a virtual hiker this year too, and I hope all the pups there have a great time!