Hi Everyone,
It has been awhile since I posted. We have been busy, then we were just being lazy. We also did not have much to say.
I have something to say now, unfortunately it is bad news. My sister, the Queen is very sick. We found out the other day that she has cancer. What an ugly disease.
She hasn't really been feeling too good for awhile. She has been slower going up and down the stairs, and she has been slow when she goes to lay down. Mom thought that it was just because she is getting old (she is somewhere between 9 & 11 years old!), or that her arthritis was bothering her, but apparently that is not the case.
Dad was giving her belly rubs over the weekend and he noticed a lump on her belly near her left back leg. We called the vet on Monday and made an appointment for her.
On Tuesday, Mom & Dad took her to the vet. She saw Dr. Ellis (Dr. Debbie is no longer at the vet office). He checked her out and said he thought it was a tumor. He also said that her lymph nodes were inflammed and also affected by this tumor. He told us - yes, I went too - that he thought it was cancer. He said it could be something else called mastitious, but since Magic was spayed 6 years ago, he doubted it. He took her in the back room to do some blood tests on her.
When he called us on Wednesday, he said that the blood tests indicated that she did have cancer. He told Mom that if she had an infection that her white blood count would be elevated, but they were not. He explained that certain enzyme and calcium levels associated with cancer in Magic's blood were elevated and that this did indicate cancer. 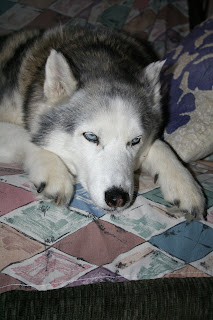 He does not recommend surgery because with the lymph nodes involved, it means that the cancer cells are circulating throughout her body. He also is not an advocate of chemotherapy. He said at most these treatments may give her maybe another year, but that the quality of that extra year may not be good ones. Mom is not an advocate of chemotheraohy either because it made her Dad really, really sick, and he died anyway.
Dr. Ellis recommend that we treat the symptoms, e.g. keep her comfortable, give her medicine for inflamation and/or pain. and treat any other symptoms that may develop, until it is time for us to help her across the Rainbow Bridge.
We do not know how long this will be, but we all intend to make the most of it and spoil Magic to let her know how much we love her. 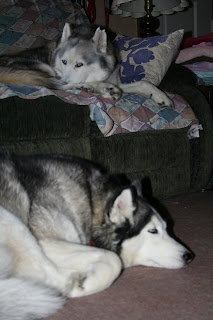 We're very sorry to hear about Magic. We hope that you are able to keep her comfortable and that you have lots of fun for all the time you have left.

Oh no!! I'm so sorry about Magic! Please give her lots and lots of hugs and snooter smooches from me. I hope she has lots more time with you and that she will be as comfortable as possible in her remaining time with you. Sending big hugs your way.

Hi Holly,
Thank You. Magic has a vet appointment tmorrow, so I will be updating her status soon.
-Georgie

So sorry to hear about Magic. Best thoughts and wishes for comfort and enjoyment, We have been through it a few times and know that these days are when some great memories can be formed.

Thank You. We appreciate your kind words.
-Georgie