Been Busy - Sort Of

It has been awhile. Mom has been busy.
I have offically been informed that I am now the Queen! Mom and Dad have been telling me this since Her Highness, Queen Fluffybutt died, but I guess it just hasn't sunk in until Mom told me that I am now Queen Fluffybutt II. She actually called me that - Queen Fluffybutt the Second! So, I guess now it is official.
Psycho Pup and I have been getting along a little better. She is relentless! She constantly wants to play - from the time she gets up until she goes to bed. I need my beauty sleep during the day and she just don't get it. I have to teach her how to chill, and get some beauty sleep.
I was able to get her to take a little nap. 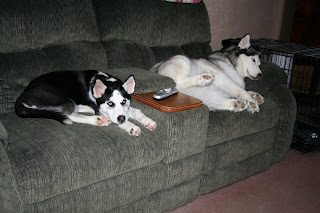 Psycho Pup has been to the vet twice - puppy wellness visits, you know the usual shots, poop test, whole nine yards. She got her rabies shot on Monday, and some worm medicine - I had to get some too just because she has worms!
Mom has been concerned because she eats some really weird stuff. Things like rocks, dirt, and we can't forget grass. Mom was really concerned because she was eating Goose poo when we took her down the park on Sunday. Mom thought there was something wrong with her, but Dr. Rubin said it was normal puppy stuff.
Mom has finished the Pink Puppy Quilt. It is cute. She was suppose to donate it to the National Canine Cancer Foundation, but there has been some mix-up, so she cannot do that. But, she is going to eventually auction it and some other quilts she is making on ebay as a way to raise money to start her own charity to help doggies with cancer. Her idea is only in the beginning stages, and she needs to do some more research to find out how to do this. 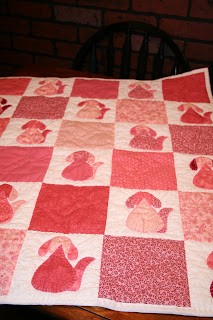 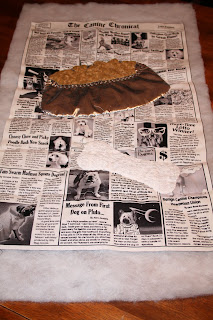 Mom is going to keep making small quilts - both Doggie themed and other themes - so that she can do a small quilt auction to raise money to start her own canine cancer charity. So check back often to see the quilts and keep updated on her progress.
Posted by DKMaialetti at Wednesday, October 07, 2009

Mom's quilts are just beautiful as are the Queen and her little princess. Glad to hear all is going well with puppyhood:)

Wooos! BeaWootiful quilt! I know my Mom will bid on it, let us know when it goes up for auction!
(from one queen to another!)
-Kira The BeaWootiful

I'm glad to all of your plans are khoming together!

AND woo have officially been given the title woo deserve!

Those puppies can be useful servants as they grow older, so don't give up.

Hi OP Pack, Thanks. Mom has been working on them in between working.
-Georgie

Hi Kira, We sure will. Thanks
-Georgie

Hi Khyra, Thanks. Psycho Pup is the one who is tiring out Mom. I am trying to teach her how to get Beauty naps, but she won't listen to me, so I have to put her in her place!
-Georgie

Hey Thundering Herd. I won't. I will make her see things my way - eventually!
-Georgie

Goose poop is a delicacy. I've tried it and I'm almost three. Is that still a puppy?

Steve,
You can be a puppy at any age. Puppyhood can be a state of mind, it will keep you yuong!
I have never tasted goose poo. It does not look very appetizing to me.
-Georgie