Pele vs The Bed

Wht does Mom keep insisting that I sleep in a bed?

Just because Her Highness has a bed, doesn't mean I want one!

I tore the previous Queen's bed to shreds - they thought it was just me being a Puppy - - NOT!!

You would think that they would get the message - but they don't.

So, last weekend Mom bought home two beds - one for Her Majesty, and one for Me. Queen Fluffers did not want hers, she wanted her old, comfy one. So they let her keep it; they just put an old quilt under it, and then tried to pawn her new bed off onto me - Not happening.

Mom thought it would be cute if I had a bed for each crate. So she put one in the crate I sleep in and one on the other crate.

Well, the other day they decided to go out. Mom put me in the crate and then took Andee (she's the teen girl who lives here) to the dentist. She was gone for a little while, but when she came back, Boy, did I have a surprise for her!! 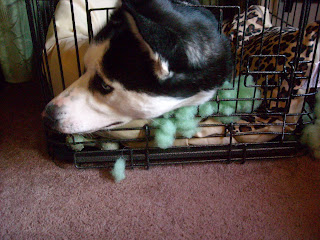 Here is some green fluffies that were inside the bed. 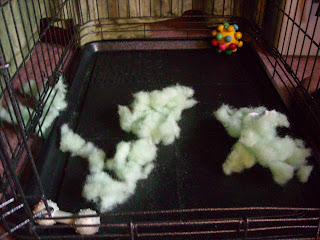 Mom just piled the green fluffies on top of the bed. She said she could not fix it because not only did I shred the bed covering, but I also shredded the lining. So, she just ended up throwing it out. 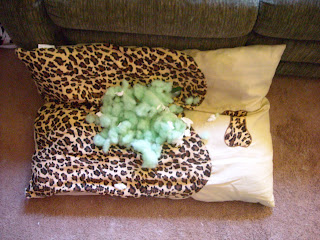 I wonder if she'll get it when woo do THAT one too?

Hugz&Khysses,
Khyra and The Golden Khousins

Miss Natasha likes her bed now, but her first few years were quite the trial as she destroyed bed after bed. Way to go, Pele.

Hi Khyra, No she probably won't get it. I heard her says shehas to get me another one. Why ? She knows I don't like the stupid things.
I have even started to eat the one in my sleep crate.
Hehehe
-Pele

Thundering Herd, I don't know. Maybe someday, but for now I am having fun shredding them to pieces.