Mom is going to send in an application for me to join H.U.L.A. (See: Meeshka's World in my list of Friends). I thought it might be nice to show Everypup, Husky and Human how mischievous I can be. So here is a series of pictures of some of the destruction I have made over the past year and a half since I came here. 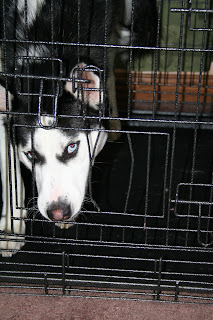 I have tried countless times to escape this crate. They put me in here when the go out. I get stuck in here and yet Her Highness, Queen Fluffy Butt gets to roam around the entire first floor. There is a baby gate keeping her down on the first floor with me. If they took that away Her Fluffiness would just go upstairs to her throne and leave me down here all by myself. 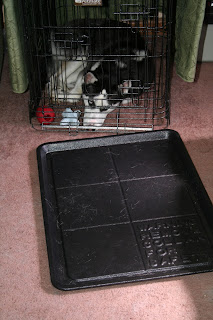 In this picture I have at least been ale to get the bottom tray out. I have gotten it out a little further since this photo was taken, but I have found it doesn't do me much good. It does however, get the humans nuts!! Hehehe!!! In this picture and the one below I broke the tie out that they put me on when I go out in the front yard. Again, they have double standards here. The Queen does not have to go on a tie out. 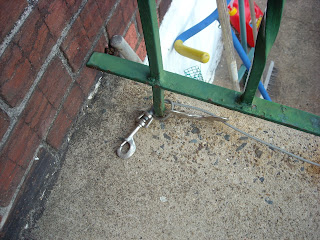 They do not put the Queen on a tie out anymore. At one time she was also tied out just like me, but they reconfigured the gate around the front of the house (Does this count as human behavior modification?), so that we could go out front without being tied up. However, unlike Her Fluffiness, I escaped! Right under the fence that goes up the steps. So now I have to be tied up whenever we go out front. BTW, I broke this tie out by chasing a squirrel who was dumb enough to be in my yard. 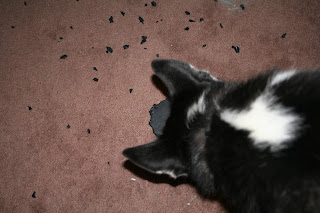 Here I am destroying what was once a coaster. I don't see what the big deal is. It was just a black circle with bumps in it. The only thing they ever did with it was to put a glass of iced tea or coffee on it. 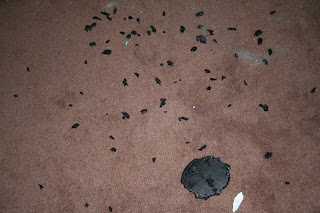 This photo here shows the coaster partially eaten. It you look really close you can also see some fluffies. 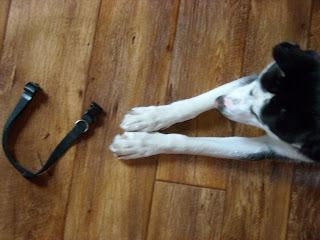 In this photo I broke my collar. Mom was trying to get me to come in the house, and me being me did not want to. However, she said the secret word COOKIE. So naturally I came running and I did not stop and the collar just snapped. It would not have happened if she did not have me on that stupid tie out!! 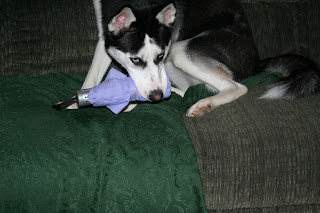 In this photo I got a hold of Mom's umbrella. I did not have a chance to destoy it, but it was fun to just have her chase me to get it back. 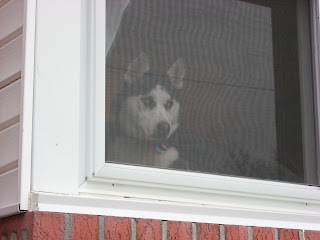 And here I am after a hard days work.
Posted by DKMaialetti at Tuesday, December 14, 2010

All that should be a guaranteed admittance! I think Queen Meeshka will be highly pleased!

Hi Holly,
I hope she will. I haven't heard anything yet. I am keeping my paws crossed.
-Pele

Oh yes...I think you shall definitely be initiated in!!! Good job! The FiveSibes say "Bravo!"

I thinks woo deserves to be in HULA!!! Woo is doing some really good work!!!