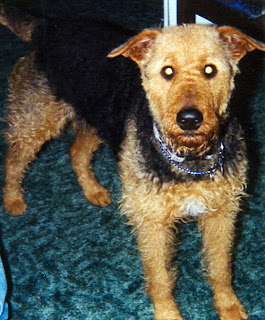 I got a new crate yesterday. I have been using my cousin, Mini HaHa's crate. Mini was an Airdale, who went to the Rainbow Bridge last summer before I got here. I put a picture of her here. I never met her but Mom says she was a pretty cool doggie.

Anyway, Mom said that I should get my own crate. She said Mini's crate was way too big for me - and for where we had it in the house. Dad also said that he would lke to get me one with a side door. Well, this one actually has two doors.

It is also pretty easy to put together. This one is all in one piece. You just unlock it, lift up on it, the lift the sides, lock it in place, and you're done. I was watching Mom put it together yesterday. She had to take the old one down - the old one is all in pieces. She had to pull out the four corner posts, the take the sides down, or more correctly watch they didn't fall and hurt the furniture (I didn't know furniture could get hurt!?). Then she had to take the top off, then all the sides and bottom. It is a really big crate. She wanted to put it in the box that my new crate came in for storage, but it doesn't fit. 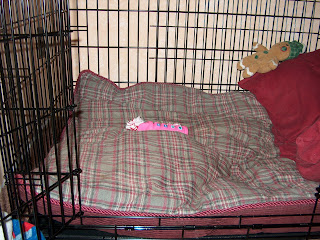 When Mom was all done setting it up she put my bed and toys in it, then she expected me to go in and check it out.

Now, let me tell you, I like my crate but only when it is time for bed! Did she really expect me to go in there when she wanted me to? She tried coaxing me in there, luring me in there, and even commanding me to go in, but I held out!

Mom had left the door open figurine I would go in. I went in really quiet and got my squeakie, but Mom saw me and put squeakie back - we have to watch the squeakies because Queen Fluffy Butt can get pretty nasty with me when HER squeakies are out, so Mom doesn't let us have squeakies. When Mom wasn't looking, I sneaked in again and got my squeakie! This worked for a little while, as soon as Mom realized I had a squeakie, she put it back and shut the door. 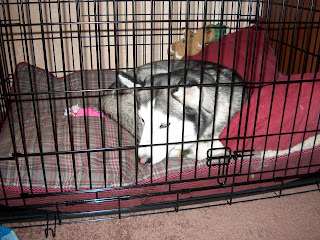 Eventually, I went in my new crate. I went in at my convenience, which was bedtime. Of course, Mom had her camera at the ready - does she do anything without that thing?

My new crate is nice and cozy. I like it. It is not as big as the other one, but it is still big enough for me to stand and move around in. I have my bed, pillow, and toys in it. I can even stretch out in it, but I prefer to sleep all curled up.
Posted by DKMaialetti at Tuesday, June 19, 2007

You look very comfy in your nice new crate! I especially like your pillow. I too like soft cushy things to sleep on! I don't think they make crates big enough for a 122 pound Malamute, so I just get either the entire couch, or the whole bed in the spare bedroom.

Hi Holly, Thank you. Yep, I like soft cushy things too. They are so comfy.
I don't get on the sofa too often, Her Fluffiness hogs it up all the time. She even hogs Dad's chair whenever he gets up!
-Georgie

Oh nice crate!!! I don't have one, but mom has threatened to get me one, ha roo!
Hugs,
Sitka

Hi. I'm MayaMarie. It's nice to meet you. You have a large crate like mine. My mom got the largest so I would have room to grow. And you have comfy pillows too! I have a comfy pillow, but it's not in my crate, b/c I tore the last one up. My mom has it in the kitchen where she can keep an eye on me. My sister Missy and your Queen fluffy butt both think they deserve the special furniture. I bet she gets you in trouble too! That's what Missy does and I get blamed for it. Now you have a nice safe place, that's all yours.
MayaMarie

Hi Sitka & Tia, Thanks. I like having my own place to go. I only sleep in it - sometimes Mom puts me in it when she goes out - but it is mostly for sleep.
-Georgie

Hi MayaMarie, It's nice to meet you also. My Mom downsized a little. I had a bigger one, but it was way too big. I can still stand in this one and stretch out too. I know what you mean about sisters, Magic always gets the good spots. And yes, you're right, she is always getting me in trouble! I am trying to be nice and play with her, she decides to growl and snarl, But I get in trouble for it! Can you believe it!?
-Georgie

Hey, I have the exact same kind of crate! Mine also has two doors, but I don't like it when my humans open the side door, it freaks me out! I refuse to use the side door!

Hi Indy,
I am a little iffy on the side door. I use it, I don't have a choice the front door is blocked. I just don't get as excited about it as I did with the other crate. I am very careful when I go in the side door.
-Georgie