I was checking out the Army of Four's blog and found Amber's answer to Sitka's question about Snow Noses very interesting.
I think Zim's nose is so Cute!
Anyway, I was checking out my nose and Queen Fluffy Butt's nose. Both of us have snow noses - mine is a little more pronounced than hers is -but after all I am a cutie!
Here are pictures of our noses: 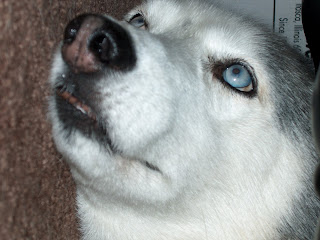 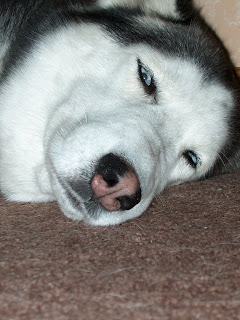 My snow nose is lighter and wider than Magic's

I think Malamutes have snow noses too...don't know about Sammies or Eskies. My cousin Amber is a Husky/Corgi mix, and she has a snow nose!

Oh, ok.
Her Fluffiness and Me are the only Northern dogs in our family. Our cousins are all various breeds, so I have no references.
-Georgie

Ohh... super cute and kissable noses there! And I agree... ZIM has a very very cute nose!

I am not sure what all breeds have snow noses.. perhaps you should put that question up to the Army of 4???

I am not sure which other breeds have snow noses. It is an interesting thing though. Your noses are very cute!

Isn't Zim's nose just so adorable!? I am definitely going to ask the Army of Four about other breeds having snow noses.
-Georgie

Thanks Lee for acknowledging our noses.
-Georgie