It's been one week since we lost our Magic.
Things are slowly getting back to normal, but I miss her - everybody misses her.
It has been so hard without her this week. There is nopuppers to play with - nopuppers to make me feel safe. I'd even be happy to have her boss me around right now.
I can do anything I want, sleep anywhere I want, and I have Mom, Dad, and Andee all to myself, but it still is not enough for me.
I miss the Queen!
Dad says I am the Queenie now, but I don't feel like a Queen. I am not the ruling type. I'd rather stay a Princess.
I have been so depressed that Mom and Dad have started looking for a playmate for me.
So, they packed me into the truck and we went looking for a friend for me. 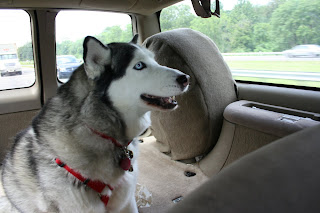 We went to a shelter in New Jersey to see a Girlie named, Laika. I did not really like her. After the initial introductions, I ignored her hoping she would go away, but she didn't. She kept sniffingme, and jumping on me. I think she wanted to play. but I didn't feel like it. So Mom & Dad told the Lady at the shelter that they didn't think it would work.
Mom gave the Lady at the shelter business cards for DVSHR and told them to call there. The Lady at the shelter told Mom that they would also call MaPaw. So hopefully one of the Rescues will go and get her.
Mom and Dad saw a cute little Husky Girl, named Nika, on MaPaw website. She had a movie (I don't have a movie of me!). Mom and Dad watched her movie and they were impressed with how she played. So, they filled out an application for her, and her foster Mommy, Deb, bought her to our house yesterday My Mom's friend, Bev also came to see how things worked out and to see how I was doing.
Mom took me outside to meet her. She was a cute little peanut. After the usual introductions we ran around a little bit. She seemed OK to me.
Mom, Dad, Bev, and Deb took us into the house. Things were OK for awhile. I was beginning to think I had found a playmate. We played for awhile, Nika checked out the house and my people - she was giving Husky Kisses to everyone. Everyone liked her.
I got tired, so I decided to go back into my spot, lay down and rest for a few minutes. Nika had other ideas - she wanted to lay, play, play! I was just tired and she would not leave me alone. I would get up and she would come running. I ran to Dad hoping he would help me out - which he did, but Nika just wanted so much to play and I was just way too tired.
So Mom and Dad decided that Nika was too much for me. They think I need another Husky about the same age as I am with the same energy leval as I have - couch potato style. So, we are still looking.
Posted by DKMaialetti at Sunday, August 16, 2009

There is a pup out there fur woo!

When woo are supposed to find her - and she find woo - it will happen!

Hi Khyra,
Yep, I know that is how it happens. I found my Mommy and Daddy that way. We were at a Pet Expo in Reading, Pa. My foster Mommy, Gloria, bought me and some of my puppies to the show. Everyone at the Expo were interested in my puppies (which was GREAT because they all found good homes!!). No one seemed like they wanted me, but just one look at my Mommy and we were hooked. I cae home from the Expo to my new home as a foster and I never left!!!
-Georgie

I'm sure it will take time for you to find the perfect pup. Now that the rescues know that you're looking, I bet they will keep their eyes out for a good friend for you too!

Funny thing for The Herd. The pup we go looking for is rarely the one that joins the Herd.

We got Rusty after going after another dog (Sunshine) who just did not fit. Rusty was the only one that both Nikita and Natasha liked.

And Kiska? When we first looked at her and all of her issues, we thought she was too much for us. But the lady with the rescue kept patiently steering us back to her until finally we agreed to try.

When the time and pup is right, it will happen.

Hi Steve, Yes, they know and are trying to help us out. But we found one yesterday. We will be posting later.
_Georgie