It's been a little while since we last posted. Mom has been busy and won't let either of us near the 'puter.
There also hasn't been much to post about. Things have been pretty boring!! The only thing that is happening is that I am blowing my coat - and I have little pluckies EVERYWHERE!!! 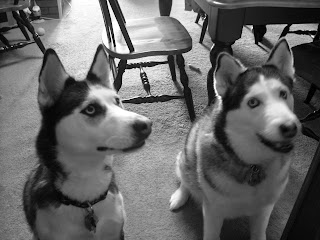 The other thing that is going on is that Mom is on a health kick. This health kick she is on has even extended to us - she has been like this since I have been here. Georgie says it is because she want to make sure that we are healthy, and don't get sick. So as a result she has been giving us this stuff that has things called antioxidants in it. These antioxidants are something called OPC3s.
These OPC3s are actually natural extracts:
Grape Seed Extract
Red Wine Extract
Pine Bark Extract
Bilberry Extract
Citrus Bioflavanoids
There is even Glucosamine in this stuff.
Mom had happened to mention to the vet-tech at the vets office, and she said MOm was giving us some pretty healthy stuff!!

We have been taking the stuff for about 2 weeks and there is a noticeable difference in Georgie. For those of you who don't know Georgie is a rescue, and she had a VERY rough life before Mom & Dad adopted her. Her life was so bad that she has hardly any spirit in her. Then after she was adopted she had heartworm and was VERY, VERY sick throughout her treatment, and she just has not had much life in her.
Well, now she does!! She has some spring in her step and she plays with me more than she use to. Although she still tires very easy, she does play more often.
She also walks a little faster when we go for walkies - she was even pulling a little when we went for walkies on Sunday!!! She never pulls (Mom usually walks her, Dad gets me!!!! - I can't pull her the way I do Mom.)

These OPC3s, definitely does Georgie some good. If any of you want to try them out - tell your humans to click on the link at the bottom of the page to order some.
Posted by DKMaialetti at Tuesday, April 12, 2011

Glad to see you back! Great pic! That's wonderful of your Hu-Mom to keep you healthy!

Not sure I would give the grape seed or wine extract since grapes can be toxic to dogs. It might cause damage over the long run for extended use.

But, I'm glad you are all getting on a health kick. Our humans are very sure to only give us healthy dog foods without BHA/BHT or byproducts or grains either. Dad jokes that we eat better than they do!

Hi Holly & Khady,
Mom was a little concerned about the grape seed also. She had mentioned it to the vet tech at the doctor's. Vet Tech believe it is healthy, however, next time we go to vet, Mom is going to ask her what she thinks.
--Georgie

Hi Holly and Khady,
Mom has done some research about the grape seed extract. From what she has been reading, the toxic component is in the flesh of the grape, not the seed. So the current thinking is that grape seed extract nis safe for dogs. Of course as stated previously, she is going to talk to our vet about it.
--Pele