We have a new addition to our household, her name is Pele.
She is a twelve week old Siberian Husky. Mom named her after thw Hawaiian Goddess of Fire and Volcanoes. 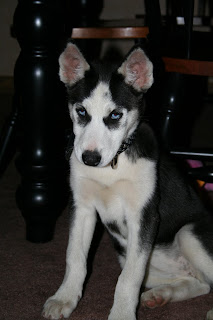 I think I told you in an earlier post tha Mom & Dad have been looking for a companion for me. I believe I also told you about the other Girls that I have met, and how they didn't work out. So here is the story of how we got Pele: 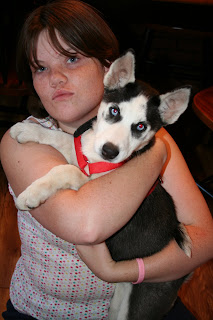 Mom ran an internet search for 'Siberian Husky + Philadelphia, Pa". She came across an ad for five female Siberian Huskies near Allentown, Pa. Mom called the number and the Lady said she only had 1 Girlie left. Mom told her that she would not be able to get there until next weekend. The Lady said she was not sure she would still be there, but that Mom could call her back next weekend and if the dog was still available we could come look at her.
When Mom got off the phone her and Dad talked about it, then rearranged their schedules so that we could go look at the pup. Mom called the Lady back, and asked if we could come up. The Lady said sure. Mom continued to talk to her and told her about our Magic, and how bad I was feeling and that the only way we could take the puppy was if I felt comfortable with her. The Lady said that she understood and would make sure that I could meet the little Girl all by myself and spend some time with her.
So, Mom & Dad packed us all into the truck and off we went to Lansford, Pa. in the Pocono Mountains of Pennsylvania. 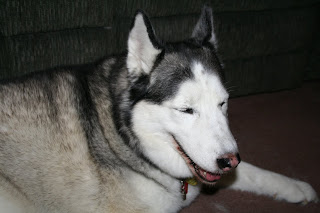 When we got there the Lady was waiting for us with the puppy. She was so tiny. After the initial meeting we ignored each other for a little while, but then we started checking each other out. She didn't seem too bad, she was just a baby. I think I could deal with her. I sat down and this little Girlie sat down just between my front paws - it was one of those picture perfect moments, but... Mom Forgot Her Camera!!!
We decided that we would keep her. So it was back in the truck for the long ride home.
The ride home was uneventful. We slept most of the way, and stopped for potty breaks.
In the house we sort of ignored each other for awhile. Then we played for a while - she is a quick little bugger. She was running and jumping and jumping and running. I thought she was never gonna stop. I got tired of playing - where do these young dogs get all their energy!? Igot tired of playing and wanted to take a nap. Of course, Pele had other ideas. But I had had enough, so I batted her with my paw, but she came back for more, so I did it again and guess what? She actually left me alone! I was so surprised. 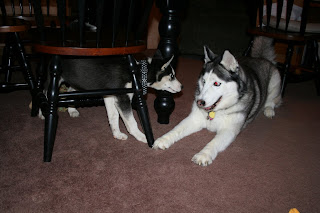 We played again a little later, and when we got tired we both laid down to snooze a little. I think this might work! 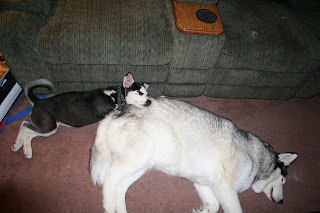 Oh that last pikhture is PRICELESS!

The power of the puppy is at work healing hearts again!

We'll be looking furward to lots of adventures!

Thank You Khyra,
She is so little, but yes, she is helping to heal our hearts.
Thank wooo
-Georgie

Awwwwwwwwww!!!
How precious! Looks like she's right at home with her new family, What a special gift for Magic to send your way. ; ) Love her name, "Pele", how pretty!

We just read about Pele on Sibernet and had to come say hello. What a sweet pup and such a perfect time for her to become a part of your family. The fun is just beginning.

Does her name mean she gots lots of spit and fire in her???? Look out! She gonna keep woo busy but hopefully furry happy.

Oh Pele, you are just too adorable! Georgie Girl, I hope you'll very happy with your new little sister.

This is just the best story ever! We are so happy for your happy ending. Judging from that last picture, you two will be bestest friends.

Gee, that sure rings a bell here! Khady constantly wanted to play with me when she first came here. It was never ending!!!

Wait a minute. It's STILL never ending, and that was a year ago!!!

Congratulations on your new puppy Georgie! I'm so glad you will not be sad any more. Puppies really are a lot of fun. I love mine a LOT. Even if she IS a turd baby!

Congratulations on the new puppy. How did everyone sleep that first night (evil grin)?

Wooos, Miss Fluffy Tail Khyra, sent me over to say Woo to the new puppy! I am sure she will get on your nerves a lot, but she will also be a great comfort and friend for you. Mom had to search far and wide to find someone for me after my big sister passed away, but all I got was annoying border collie little brother. Do you want to trade???? It is so nice to met you and I hope we can become good pals!
-Kira The BeaWootiful

Hi Everyone,
I want to thank you all for the Well Wishes, and saying Hi to the Little One - and she is "Little", she is the runt of the litter.
We believe that she will fit in good here. She seems to be a quick learner. But boy-oh-boy is she full of energy!
Mom and Dad named her Pele, because of the look in her eye, Dad says she has a devilish look about her!
Thanks to all of you:
Khyra
The Op Pack
Cyber Sibes
Biloxi
Tracey and Huffle
Steve, Kat & Wilbur
Holly and Khady
The Thundering Herd
Kira, the BeaWooful
I am so glad I have all my Cyber friends wishing us well! Mom, Dad, Andee and Me appreciate all of your support and well wishes.
-Georgie (and yes, Pele, too!)

woowoo! welcome little one! I hope you help to heal your momma's heart!

Thank Woo, Simcha. She is helping a little already.
-Georgie

Pele is the puppy's name. The older Girl is Georgie Girl.
She is a rescue and a Wonderful Girl!!